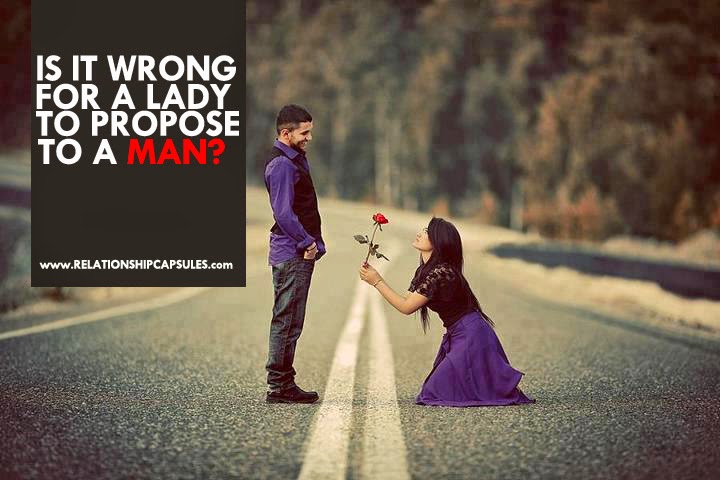 What happens when the bush meat chases the hunter?
An hunter is supposed to search for bush meat in the forest and hunt for it, but when the bush meat begins to pursue the hunter, there would be a cause for alarm and that’s dangerous.
These days, so many women have resulted into proposing to a man. Last week, I saw a picture of a lady proposing to her fiance on her knees and I was like , hehehehe, now she is the hunter.
In this African age, culture stipulates that the man weds a woman and does all the proposal processes but at a later time in this ongoing future, some people began to see a need for reversal. They felt they could inculcate the foreign culture and flow with the trend. They bemoaned the idea of a man doing it all.
Well, before I state my views, I would love to add the views of some friends on this same topic.
Question: Do you think a woman should propose to a man?

From the Men:
—–“He who finds a wife not she who finds a husband. If she had fallen in love, I will only advise she create an enabling environment for me to pop the question and not her doing it. She can ask me “Hey bobo, what is going on? Me and you know that we are not related?” By Matthew Adedoyin of Abstinence Icon. —-

“As for me, a woman may propose to a man but I would not subscribe to her doing it verbally. She should use non-verbal ways of expression. A sensitive man will pick the message, he won’t pick a message of ‘she wants me to have a relationship with me’ which can put him off, instead he will pick a message of ‘I think she likes me – she really likes me’, and that can endear the man more to the woman and hopefully compel him to spill the beans. Caring for him more than every one else, paying attention, speaking his love language regularly. Also, being in his face and words all the time but communicating with him based on the things that stimulates his interests”. By Gabriel Olatunji of www.olatunjispeaks.com —–

(CONTINUE READING BY CLICKING THE NEXT PAGE BELOW)

3 thoughts on “When The Hunted Becomes The Hunter”