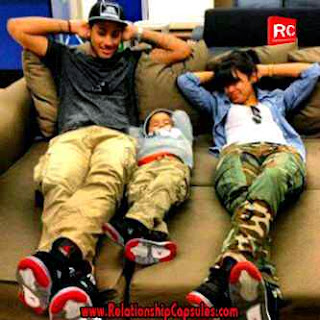 This is a couple who shared light on how their marriage almost crashed and what they did to bring it back to life.

Six years into our marriage, I realized Jimmy wasn't on board with the reality of our life — we had a 4-year-old daughter and responsibilities, and he was still acting like we were in our carefree 20s. His whole Peter Pan, playful attitude was partly why I fell in love with him, but now it was breaking my heart. I was a broken record asking him not to party so much, and Jimmy
wouldn't participate in counseling. I felt like I'd tried everything. Finally, I told him I wanted a divorce. He went into panic mode, promising he would do anything to get me back. But I really thought it was too late. Jimmy moved in with a friend and eventually got his
own apartment.

In the months he was gone, though, I found myself missing his whimsical approach to life, the way he could
make friends with everybody. Most of all, I just missed us. I started therapy and realized that by not being clear about what I really needed, I was actually supporting much of Jimmy's behavior. I began to wonder if he could refocus his priorities and, if we pitched in together on our relationship, whether we might be able to make it work.

Driving home one night, about nine months after Jimmy moved out, I was remembering the book Eat, Pray,
Love, the part when the author, Elizabeth Gilbert, hit rock bottom and called out to God for help. I did the
same thing. I said out loud, "What is the answer?" Right then my phone rang; it was Jimmy. That was my sign that it was time to give my marriage another go. I told him I wanted to try couples therapy. I'd never fallen out of love with Jimmy, but our counseling sessions helped me respect him again as a
partner. He really had changed during our time apart. He rarely goes out now, and when he does he's home by 10. And he sold his motorcycle to help us pay off some debt. Those changes made it clear that our family was finally his number-one priority.

Our marriage started to deteriorate because Christine and I just weren't on the same track. I wanted
to stay out until 4 in the morning on my motorcycle. Christine wanted me around more for our family. She suggested counseling, but I didn't see the need to. But when she told me she wanted a divorce, I was devastated. I told her from Day One that I would do
whatever it took to make our relationship work. I moved out and began therapy to find out what I needed to work on in myself. My priorities began to change. When I was living with Christine, all I wanted to do was party. When I was alone, I just wanted my family back. I realized they were more important to me than anything
else. I kept waiting for Christine to give me another chance. Nine months after we separated, she finally did.

We went to counseling, I sold the bike, and we moved back in together. Now, a year later, we're both on the same page, happier than we've ever been, and we are having our second child too.

Don't be afraid to start again. Marriages would be much fun if the two parties were ready to help each other and focus on having a good time together with kids or not.

Sure you learnt something from them?

Whether you are married or not, you can always learn from people's experiences.